Posted on June 20, 2013 by Rebecca Fuentes | Comments Off on Workers’ Speak up for the NY Farmworkers Fair Labor Practices Act! 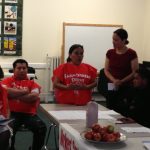 Farmworkers from Western NY came to Syracuse in support of our efforts. Gracias!! 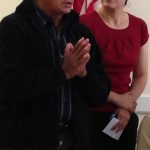 Dairy farmworkers spoke about their working conditions to NY State senator Dave Valesky. They asked him to vote yes on the passage of the Farmworkers Fair Labor Practices Act.

On Friday, June 14, the Workers’ Center of CNY organized an open meeting with Senator David Valesky to express their support for the Farmworkers Fair Labor Practices Act, a bill in the senate that will grant collective bargaining rights, overtime pay, a day of rest, among other important rights already afforded to non-agricultural workers. Workers’ Center leaders Matilde and Sonia Bravo gave Senator Valesky copies of signatures collected thru a petition asking him to vote in favor of the bill. At the table were local farmworkers speaking about the need for a day of rest, overtime pay and collective bargaining and several who couldn’t attend the meeting send out testimonies about their working conditions and the need for labor equality. Aly Wane, Workers’ Center board member spoke about  the segregationist roots found in the exclusion of farmworkers from basic labor rights since the 1930’s when the Federal Fair Labor Standards Act was passed. It was an honor to welcome farmworkers from western NY who, along with Peter Mares from Rural Migrant Ministry, also spoke to Senator Valesky and the people gathered at Plymouth Church on that day. A farmworker woman spoke about the issue of gender discrimination in the fields and told of the injustice of constantly being paid less than man farmworkers. At the end of the meeting the senator was asked directly if he was going to support the bill and he said that he was working on a bill that had chances of passing because as is, the bill didn’t have a chance to become law. When pressed about being specific on the provisions of the bill that he had issues with, he didn’t provide a specific answer but continue to say that he will aid Senator Sevino to come up with a compromise bill. It was disappointing to not get an answer from Senator Valesky but his record shows he is one of the mayor opponents to this bill. For members of the Workers’ Center this meeting was very important as they have participated in several actions in support of the campaign and we have members who are farmworkers and workers who have become allies and supporters of this campaign. Our purpose with the meeting was to express our support for farmworkers and to make it known to Senator Valesky and the community that farmworkers deserve equal rights NOW. We are very proud to belong to the Justice for Farmworkers Campaign Coalition and stand in solidarity with NY Farmworkers and farmworkers of the world. As one of our members wrote on a sign he carried at the May 13 Farmworkers Abany Day of Action “Our mission is to produce the food to feed the world” those who labor to produce the food we eat deserve equal rights, nothing less, nothing more. Thank you to all who attended and please make sure you are contacting your senator, making phone calls and supporting the campaign in any way you can.

This entry was posted in Uncategorized. Bookmark the permalink.